No Aardvarks were harmed in

A Science Fiction Classic and a great favourite with Theosophists 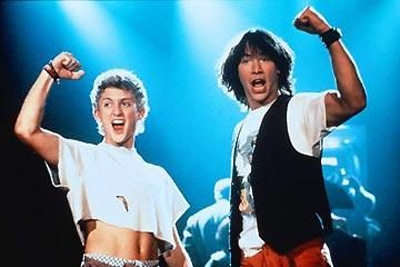 Be Excellent to Each Other!

Bill & Ted's Excellent Adventure (1989) is an American comedy/science fiction film in which two Heavy Metallers travel through time in order to gather a group of high profile historical figures for their high school history presentation.

The film script was written by Chris Matheson and Ed Solomon and directed by Stephen Herek. It stars Alex Winter as Bill S. Preston Esq., Keanu Reeves as Ted "Theodore" Logan, and George Carlin as the mystical Rufus from seven hundred years in the future.

Bill S. Preston Esq. (Winter) and Ted "Theodore" Logan (Reeves) (or simply "Bill & Ted") are two Heavy Metal obsessed teenagers (big Iron Maiden fans) in San Dimas, California, (1988) who are about to flunk out of high school because they are failing history class.

The only way they can pass history is to get an A+ on their upcoming history report. This situation is particularly "heinous" because Ted's authoritarian policeman father, Capt. Logan, has threatened to ship him to the (run by the psychotic Colonel Oats) if he fails.

Miraculously, a guitar-playing guru named Rufus (George Carlin) arrives from of the future (2688) to help them pass a vital history report, because their garage band Wyld Stallyns holds the key to world peace and ultimate truth. However, they will not achieve this destiny if they drop out of High school out and Ted is shipped to . Rufus lends them a time machine disguised as a phone booth to help them get an A+ on their oral report. Various time traveling shenanigans ensue, as they proceed to "collect" various historical figures, including Napoleon Bonaparte, Socrates (whose name they pronounce “So-Crates"), Billy the Kid, Sigmund Freud (whose name they also mispronounce, "Frood"), Ludwig van Beethoven (whose name they also mispronounce, "Beeth Oven"), Genghis Khan, Joan of Arc, and Abraham Lincoln to help them with their final history presentation.

They also find love with Princesses Elizabeth and Joanna in 15th Century England, at the court of King Henry (presumably Henry VII, as the princesses, who are young women when Bill and Ted meet them, are said in Bogus Journey (the sequel) to be 521 years old; as that film is set in 1991, the princesses were therefore born in 1470). They also run into some problems, including mechanical troubles with the booth, and Ted's brother, Deacon, "ditching" Napoleon even though he was told not to let him out of his sight.

The film was shot in the , metropolitan area, mostly in and around in .

From its small beginnings in a garage in ,

all the problems of civilization

The time machine was a 1960s American telephone booth and British viewers will immediately think of Dr Who’s Police Box TARDIS, however, the Bill & Ted telephone booth lacked the huge interior spaces of the Doctor's TARDIS.

The film was followed in 1991 by a sequel, Bill & Ted's Bogus Journey.

The film produced the two most Triumphant Theosophical Slogans of all time;

Be Excellent to Each Other!

For more info on Theosophy

Please feel free to use any of the 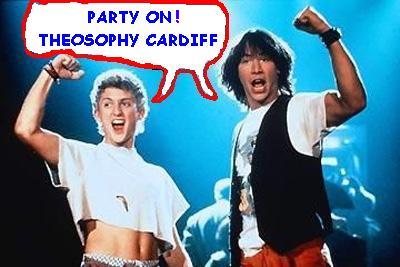 If you run a Theosophy Group you can use

The South of Heaven Guide to

An Outstanding Introduction to Theosophy

By a student of Katherine Tingley

Elementary Theosophy  Who is the Man?  Body and Soul

The Seven in Man and Nature

The Meaning of Death

Wales is a Principality within the United Kingdom and

has an eastern border with England.

Snowdon in North Wales is the highest mountain at 3,650 feet.

The coastline is almost 750 miles long.